Changes in the treatment of the Crown in insolvencies 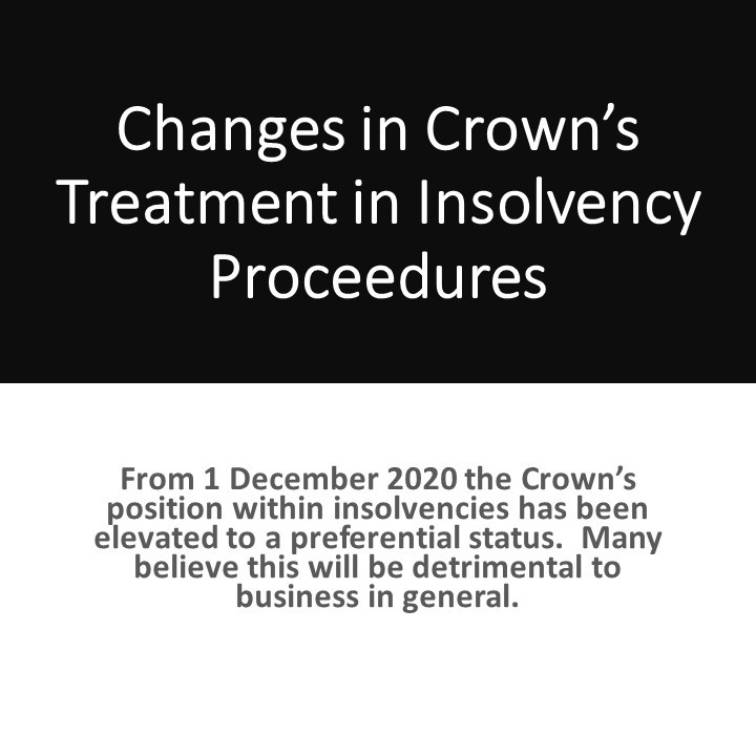 On 1 December 2020 the position of the Crown for certain taxes (mainly PAYE and VAT) in insolvencies changed and it has been elevated to a secondary preferential status. The change means the Crown will now rank for payment ahead of many other creditors. The affect of this is likely to be felt by business in several ways. In particular;

The changes mean the order of payment is now as follows:

The Crown will now receive funds ahead of many other creditors. So how is this likely to affect businesses?

Bank lending - When banks lend money to business part of their consideration is what is the value of their security. Banks will normally have fixed and floating charges in place for any significant lending. It can be seen that any fixed charge lending will not be affected but the bank's floating charge has been pushed down the order. Often the bank relies heavily on its floating charge to recover funds if a company fails. The affect is likely to be that banks will anticipate lower returns from any failed companies and will probably be less likely to lend and the cost of borrowing is likely to go up.

Distributions from insolvencies - There are two points to consider here. The first is that the Crown has been elevated up the order of priorities which means there is less funds available for other creditors and at a time when coronavirus restrictions are causing significant hardship for businesses this is not welcomed by many. In addition to this, the Crown has deferred taxes for thousands of businesses to assist with the cashflow problems caused by coronavirus and the uptake for this assistance has been widespread which in turn means that the Crown's claim for VAT and PAYE in many insolvencies is more significant.

CVAs - In certain circumstances CVAs provide for the rescue of a company and a better return for creditors (you can read more about CVAs here). However, CVAs need to be approved by 75% of the creditors and where HMRC's claim is significant the return to other creditors will be reduced. The effect will mean that the unsecured creditors are more likely to reject proposals for CVAs. For example, before the change, a CVA might have provided for all unsecured creditors including the Crown to receive 50% of their debt over a period of time. The unfortunate consequence of the change could mean that in the same CVA the Crown will now get paid in full from a CVA but the other unsecured creditors might only receive 5% and are unlikely to vote in favour of this and therefore the company would probably need to be liquidated instead, which is likely to mean an even lower return for everyone.

The rationale for HMRC is that more money will be returned to the public purse. But will it really? Rescues and CVAs will be more problematical and a rescue or CVA will always return more money to creditors (including the Crown). In addition, more companies will fail because of lack of support from the banks and the difficulties with rescue options. So it is possible that the effect will be that there will be more insolvencies overall and the Crown will receive less from insolvencies and, of course, other creditors will receive much less.

The general opinion of the insolvency profession is that the change is short sighted and not in the interest of business as a whole. That said, at Brailey Hicks we are working on schemes for CVAs and rescues which effectively deal with the issues the Crown's new status has created.

Brailey Hicks would be pleased to discuss any queries that are likely to occur as a result of these changes. All initial advice is free of charge. During coronavirus we will usually hold meetings by Zoom or a similar platform but can arrange socially distanced meetings in person where necessary.